Justice is a Black Woman: The Life and Work of Constance Baker Motley 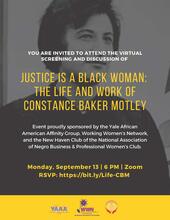 In honor of Constance Baker Motley’s 100th birthday, join the Yale African American Affinity Group, Working Women’s Network, and The New Haven Club of The National Association of Negro Business and Professional Women’s Club’s Inc. for a virtual screening of Justice is a Black Woman: The Life and Work of Constance Baker Motley. This documentary chronicles the life and work of Motley, an “unsung” hero of the civil rights movement. Following the screening, we will have a Q&A with filmmaker Dr. Gary Ford Jr.

Ford’s book, Constance Baker Motley: One Woman’s Fight for Civil Rights and Equal Justice under Law, examined the life and work of Motley. She was the only woman lawyer on the Brown v. Board of Education legal team, the first African American woman who argued cases before the United States Supreme Court, and the lawyer who won cases that desegregated public schools, the universities of Georgia, Mississippi, Alabama, housing, transportation, lunch counters, museums, libraries, and parks as well as cases that freed Martin Luther King, Jr., freedom riders, and sit-in protestors from jails. The book was included in the April 22, 2018, New York Times book review under the title, “Trailblazers in Politics and Civil Rights.” It was also included in the Harvard Authors’ Bookshelf, the Columbia Authors’ Bookshelf, and The New School Authors’ Bookshelf.

Copies of the book are available for 40% off through September 30th using code UAPWEB40 on the University of Alabama Press website.

You can also join Women United for a book club discussion on Dr. Gary Ford’s book on Friday, October 1 at 12-1 pm.